Brugmansia arborea originates from the Andes region of Ecuador, Peru, northern Chile and Bolivia. In its natural habitat it grows as a bush or small tree (arborea = like a tree). It prefers high altitudes, which are drier, between 6500 to 9750 feet. Periods of frost are not uncommon there. If the cold is too severe or if it is dry for too long, the plant loses a lot of leaves along with its younger, thinner branches. Once the unfavorable environmental conditions are past, this species sends out new shoots and continues to grow.

B. arborea is easy to recognize from the size of its flowers. They are the shortest of all the species of Brugmansia. The trumpet-shaped corollas are between 4 1/2 to 6 1/2 inches long, are white to creamy white in color and noticeably widen out to the edge of the flower. At the edge there are clear heart-shaped indentations between the turned-back peaks, which are approximately 1 inch long. When viewed directly from below, these look like five pointed stars.

During its vegetative period, B. arborea flowers evenly and constantly. Unlike other species of Brugmansia that flower in bursts, its flowers develop continually. This, plus the fact that the individual flowers have a relatively long flowering period of about four to six days (because of the stable nature of their corollas), means that during the summer months this Angel’s Trumpet always retains the same appearance.

In their natural habitat the pendulous flowers are usually pollinated by moths. These are attracted both by the white color of the flowers and by the perfume that becomes stronger in the early hours of the evening. Even if Brugmansia flowers do not “emit the musk perfume of the night” (Vilmorin’s Blumengartnerei, 1896), the perfume, considered to be very intense and often almost intoxicating, does vary noticeablly from species to species. In some cases it can help to identify a plant.

The corolla of B. arborea is tightly enclosed by the calyx, which is long compared to the overall size of the flower. In this species, the tube-shaped part of the corolla, which is short and narrow, is almost always covered. The calyx, covered in velvety hairs, has a deep slit on one side. The elongated point, opposite to the slit, normally stands up like a horn, but occasionally can be split into smaller “teeth”. Frequently, the calyx falls off after it has been successfully pollinated. Sometimes dried bits remain stuck to the developing fruit.

This extremely robust Angel’s Trumpet is found along the mountain slopes of the Andes from northern Colombia to northern Chile at altitudes of 6500 to 9750 feet. B. sanguinea usually tolerates the light frosts that occur frequently in these regions. If the periods of frost are too long or too cold, then the plants lose their leaves and branches and freeze back into the wood. In the next vegetation period they produce new shoots without any difficulty from the surviving plant stalks.

B. sanguinea is easy to recognize from the shape of its flowers. The corolla is tube-shaped and widens out only at the mouth opening. The prominent yellowish green flower veins which are furry, give the corolla a stability no other Angel’s Trumpet has. The flower edge curves back as if it has been rolled. It ends in peaks about 1/2 to 1 inch long that curve back. In this species, the length of the flower can be from 6 to 10 inches, depending on the variety.

B. sanguinea is the most wonderfully colored of all the Angel’s Trumpets. While pastel-colored corollas dominate in the other species, these plants have intense shining colors or combinations of colors. There are multicolored forms with a green flower base, yellow or cream-colored middle, and red or orange mouth found, as well as single-colored forms whose flowers are colored a brilliant red, pink, orange, golden yellow or light yellow. No white-flowered plants have been found. The variety and the prevalent temperatures have a major effect on the coloring of individual flowers. Thus, a plant that is tricolored in summer when the temperature is about 68 degrees F, will become two-colored in fall when the temperature is about 50 degrees F. A plant that in summer has brilliant yellow flowers will have greenish yellow flowers in fall.

Very warm summer months can unleash veritable explosions of color in the other species of Brugmansia, but plants of B. sanguinea will have no flowers at all. This is mainly due to temperature conditions. In this species, temperatures above 71 degrees F seem to inhibit flower development. New buds do continue to form, but when the temperatures are high, the buds only reach an average size of about 1/2 inch before they dry and fall off. This is what makes this Angel’s Trumpet ideally suited to be a greenhouse plant. It will flower there for almost the whole winter. 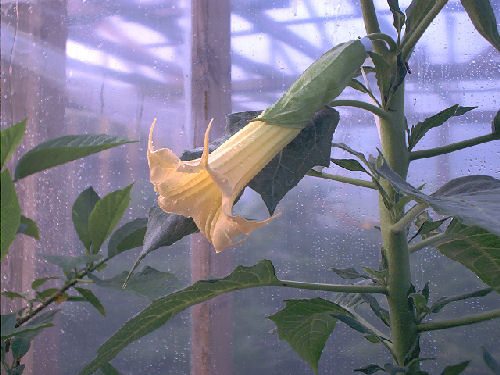 Brugmansia x flava (flava = yellow) is a cross between B. sanguinea and B. arborea. B. x flava has characteristics of both arborea and sanguinea.

An oddity of note is the tuberous formations often found in the root area. This tuberous formation tends to restrict the plant from quickly forming a dense root system. The tubers are like roots and take up water and nutrients. Sprouts also develop on the tubers.

As with B. sanguinea, B. x flava also has the ability to form new vegetation points on their roots.

(Pronounced: vul-kan-ih-KOH-luh) is another naturally occurring brugmansia and are the most rare of all the Angel Trumpets.
They are found in Columbia in regions of high altitude and even there only isolated plants are found.

The vulcanicola is considered to be difficult to grow in hot climates preferring higher altitudes with cooler climates.
Vulcanicola may be crossbred with B. arborea, B. X flava, B. sanguinea, and by other vulcanicola.